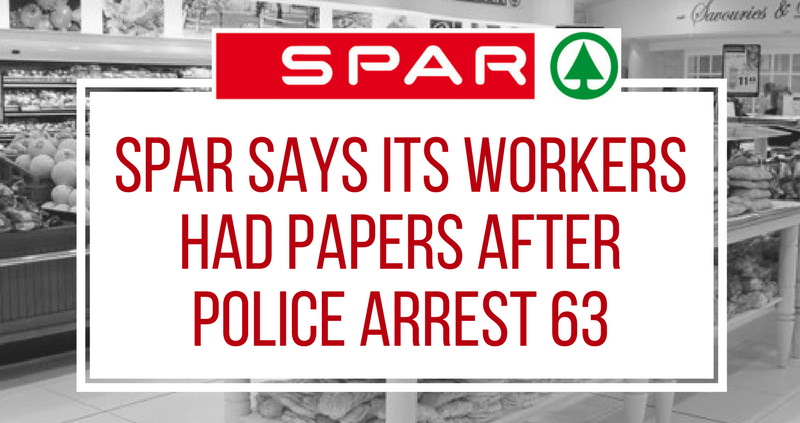 The Spar retail group has responded to allegations by the Department of Home Affairs, saying that it does not wittingly employ undocumented migrants

Retailer Spar has denied wittingly hiring undocumented migrants as alleged by the Department of Home Affairs, which is driving a crackdown.

The authorities had arrested 63 migrants working at three Spar branches, said Gigaba. Spar store managers at the retailer’s Montana, Doornpoort and Zambezi outlets would be charged.

Spar spokeswoman Stephanie Leclercq on Friday confirmed the arrest of 63 staff members. “These people have been detained, but more than 40 have returned to work as they have been released after showing their valid documentation to the authorities,” she said.

“The remainder of them seem to have documentation, but it seems to be false.

“The retailer in question is in discussions with the department to establish a way forward in identifying if potential employees’ documentation are valid or not,” said Leclercq.

She said every store in the Spar chain managed its own staff appointments, but the group provided management with guidelines consistent with labour law.

“We will discuss the issue in question with the retailers and assist them in putting systems in place to prevent it happening again in the future,” Leclercq said.

“It’s important for government to ensure there is effective policing in our communities. The anger that South Africans are experiencing should be directed at a government that has failed economically,” said Maimane.

Home affairs spokesman Mayihlome Tshwete said the department was trying to ensure compliance in the hiring of documented migrants in sectors including construction, agriculture and hospitality.

Tshwete said businesses were encouraged to come forward to avoid fines or charges of unfair labour practice. He also urged the diplomatic community and African leaders to be careful in commenting publicly on the tension and to avoid sensationalising the issue.