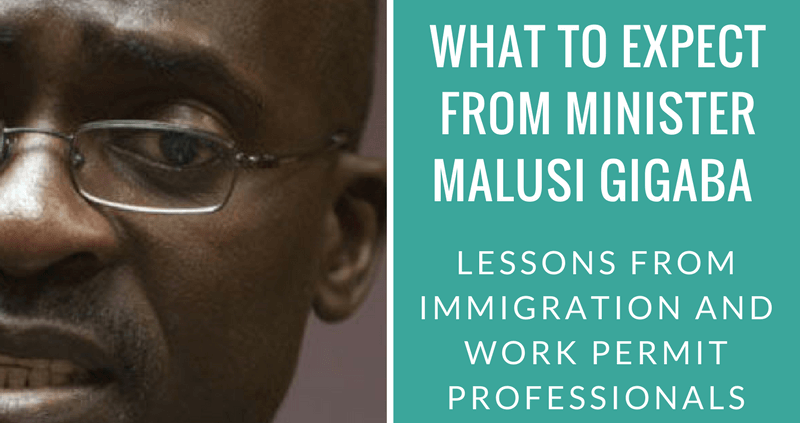 As the African saying goes, a leopard cannot change its spots and the zebra its stripes. Perhaps there are some lessons to be learned, optimistic but also cautionary, now that the immigration fraternity pass on the baton to fellow professionals with vested interests in National Treasury and SARS.

Minister Malusi Gigaba was appointed as Minister of Home Affairs in May 2014. We have no specialist knowledge on his relationship with his former employees, however, dealing with the Department of Home Affairs on work visas daily, we have seen the positive transformation with him at the helm. The Department now have better processes, legislative direction and drastically improved administration (except perhaps in the case of an application for a “general” work visa which requires the Department of Labour’s blessing). Our sense is that the Minister has created a space for competent home affairs officials to get things done.

Some recent initiatives include the formal introduction of permanent residency for graduates, the introduction of VFS to outsource administration and a White Paper to completely revamp work visas and migration etc. There is, of course, unfinished business such as with regard to the law that obliges South African passport holders to travel with their passport in and out of South Africa and how South Africa should be dealing with the thorny matter of dual passport holders. However, the bottom line is that the Minister has done plenty in a short period of time and where many before him have failed dismally. As work visa and immigration specialists, we are sad to see him go and he leaves a much more robust Home Affairs department.

Some of the less favourable examples of Gigaba’s legacy are, of course, the requirement of abridged birth certificates for children travelling to South Africa and the more recent inspections to ensure South African businesses comply with the requirement to employ a minimum of 60% South African citizens. In particular, how the abridged birth certificate issue was handled has raised many concerns and may have cost our country plenty.

Onto Finance and Tax

So, what does the Minister’s appointment mean for National Treasury and SARS, both being structurally sounder than the Home Affairs department which Minister Gigaba inherited? As he did with Home Affairs, the Minister will probably allow the good guys to get on with their work. There may be some winning over to do, as he comes in with a negative presumption on the reason for his appointment, however, if you consider where Home Affairs was a couple of years ago, compared to where it is now, I have more hope than most.

A bigger concern will be whether he intends to adopt any controversial positions. As he is now dealing with economic and tax policy, the cost will be far greater if the Minister should allow another abridged birth certificate type debacle. That matter has shown us that he takes principled policy decisions and drives them hard even where there is good evidence that a contrary view would be preferred.

The Minister has achieved much at an early age, which will hopefully come with the ability to learn from one’s mistakes and make a good recovery thereafter. He might even connect the long-waited dots between tax policy and immigration matters.

More accurate registering and tracking of foreign nationals was one of the Minister’s landmark initiatives while at the helm of the Home Affairs department. Sharing that ability with SARS to ensure everyone pays their taxes will no doubt make a difference to our tax collection. Coming down on employers of foreign nationals who do not play by the rules was something important to him, and now with the taxman doing his bidding, he should arrive with more purpose. On the passport matter, South African passport holders who contribute nothing to our fiscus and feel they owe the country nothing (even though they use our passport) may also find themselves on the wrong side of the Minister, especially with some recent policy announcements on expatriate taxes. Making a tax check on passport renewals is an easy step with the systems he has introduced.

I may be one of the few positive voices, but our work permit business has transformed under his stewardship, mainly due to the creation of an environment which looks after the ones who align themselves with good practice and compliance. Obviously, I will have to chin-up if by publishing there has been a presidency change, but if I can make one request to the new kingpin, it is that he transfer Minister Gigaba back to Home Affairs.

Director – Head of Immigration and Mobility

Permanent Residency Applications Submitted prior to June 2014 – to be re-submitted...