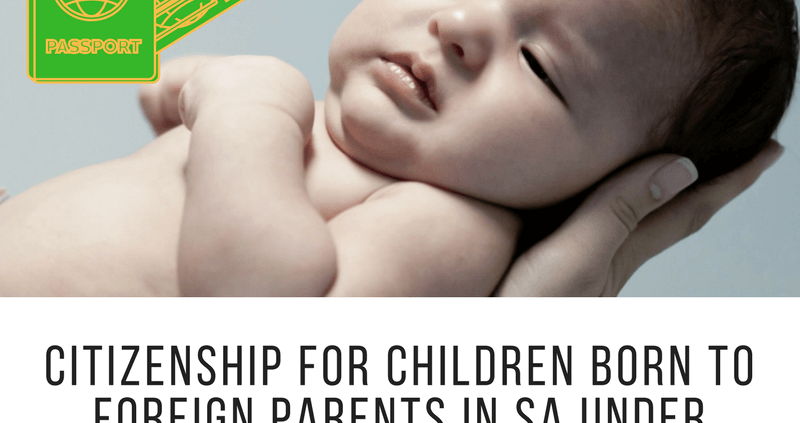 A child born in South Africa does not automatically qualify for South African citizenship if their parents are foreign.

According to Advocate Priscilla Jana, deputy chairperson of the South African Human Rights Commission (SAHRC), the organisation has been unaware that unabridged birth certificates were not issued to such children.

Following confusion and disappointment after the implementation of the unabridged birth certificates visa regulations for minor travellers going in and out of SA, the SAHRC now says they will review why children born in the country to foreign parents are not automatically awarded citizenship by the Department of Home Affairs.

DHA spokesperson, Thabo Mokgola told Cape Argus earlier this week that the department’s policy was that “for record purposes, a notice of birth” is issued to children born to foreign parents in SA instead.

The DHA also says that despite the SAHRC claims, South Africa “legislation on this fundamental matter of citizenship is clear”.

The DHA says that children can only become citizens of South Africa “in terms of birth, descent or naturalisation. Citizenship is not in every country based on nationality of territory. Children born of permanent residents follow their parents’ status.”

They say that children born outside of these requirements have to follow a different protocol. The notification of birth issued by hospitals in SA can “be taken to the parents’ countries of origin for registration and issuance of passport, after which the child will be issued with a derivative permanent residence permit status, upon application.”

According to Mokgola, a notice of birth, containing the child’s foreign parents’ details as correctly documented in their valid passports and visas, will be sufficient for the child to travel outside of the country to be registered.

Mokgola tells Traveller24 that children born to registered and documented refugees and asylum seekers will also be able to use the notice of birth to exit the country to gain citizenship from their parents’ country of origin.

The DHA notes that when foreign parents are in South Africa illegally, and a child is born in the country to such parents, they are “disadvantaging their own children” as these children’s notice of birth will not be helpful in gaining the child citizenship.

Many foreign parents in SA are not registered, however, and their children are automatically disadvantaged and their human rights infringed upon because of this.

But the DHA insists that it’s the “parents who fail to take responsibility to safeguard their children’s identity and nationality, precisely because they themselves are in the country illegally”.

It is exactly here where the SAHRC along with Cape Town attorney Joy van der Heyde feels that children’s rights are infringed upon due to no fault of their own.

Van der Heyde tells Cape Argus that she deals with such cases, and has filed nine notices against Home Affairs in the Western Cape High Court. All notices related to the department’s alleged refusal to issue unabridged birth certificates to foreign parents.

Van der Heyde points out that the notice of birth is issued by the hospital when a child is born can not serve as an identity document, which means that the child cannot be registered at school or obtain social grants.

Furthermore, it is impossible to adopt a child without an unabridged birth certificate, which is a further disadvantage to children born in such circumstances.

In cases where one parent is South African, and the other a foreign citizen, the latter parent’s details are also not included in the child’s birth certificate – which is both an infringement on the child’s rights as well as his or her right ability to travel.

As both parents won’t be listed on the unabridged birth certificate, the child will be unable to travel in and out of the country as they need the consent of both parents to do so.

It is every child’s right to have a name, identity number or a country of origin and the DHA’s refusal to issue children born in SA with the proper documents falls short of their basic human rights, hence the SAHRC involvement.

What to Expect from Minister Malusi Gigaba | Lessons from Immigration and Work...