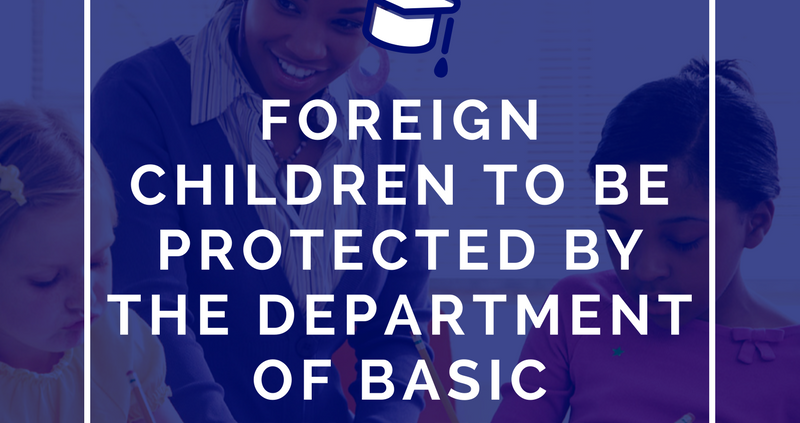 On 22 February, a letter was issued by a governing school in Edenvale, informing parents that if any foreign child who has incomplete documentation will be escorted by the police and the parents should fetch them at the police station. This had led to major outrage among all foreign families living in South Africa.

The Department of Home Affairs immediately took to social media addressing the situation stating that the instruction did not come from Home Affairs and that the letter must be ignored and apologised for any ‘hurt’ that may have been caused.

The Department of Basic Education has been urged by Human Rights Lawyers, to issue a Directive instructing all schools to refrain from discriminating against foreign- and even undocumented children by refusing- or charging higher fees to them. They are further requesting that the Directive should also state that the schools will assist the foreign children with obtaining the necessary documents.

The rights of children within South Africa clearly states –

“All children in South Africa are equally entitled to education regardless of their status or documentation. The Schools Act prohibits discrimination of any form when it comes to admission to school.”

The directive should also indicate that schools have a responsibility to assist children to obtain documents‚ Lawyers for Human Rights‚ the Centre for Child Law and Equal Education Law Centre said in a joint statement.

This comes after an Edenvale‚ Ekurhuleni‚ school governing body issued a letter last week that threatened to take immigrant pupils without valid paperwork to the police. After outrage on social media‚ the governing body called the letter “unfortunate” and said it “unreservedly” apologised for any hurt the letter may have caused.

The human rights lawyers said although the school has retracted the letter‚ “unfortunately the Eastleigh school incident is not an isolated event”.

“At the beginning of each school year‚ particularly 2017‚ we receive reports of children being denied admission to school. These include not only undocumented migrant children‚ but also documented refugee and asylum seeker children and undocumented South African children. Whatever their status or level of documentation‚ children are always entitled to their rights.”

They spelled out the rights of children in this situation:

– Children are never to be detained for immigration purposes. This is an absolute right.

– All children in South Africa are equally entitled to education regardless of their status or documentation. The Schools Act prohibits discrimination of any form when it comes to admission to school.

– The Constitution states that the best interest of the child is of paramount importance when dealing with children. The National Education Policy requires schools to assist the child to obtain documentation where there is none. The burden to comply with documentation requirements is shared between parents and the school. Where the child is part of a child-headed household or an unaccompanied child this burden is shared by the school and the Department of Social Development. These responsibilities are in place to ensure that nothing prevents a child from going to school. A school cannot merely reject a child for having no papers.

The lawyers commented: “It is important to take into account the various factors which lead to children being left undocumented and to consider that these factors are always out of the child’s control. Refugee and asylum seeker children are entitled in terms of the Refugees Act to obtain the same permit as their parent. Yet they often have trouble obtaining or renewing their permits‚ because of widely reported and widespread corruption the Refugee Reception Offices.”

They said they have also encountered unlawful refusals of admissions for children without birth certificates. This is despite the fact that some children cannot obtain birth certificates‚ because the Births and Deaths Registrations Act makes it impossible for certificates to be obtained by children of single fathers where the mother is missing or undocumented‚ children in child headed households and children in the care of guardians where the parents are alive as well as children of undocumented parents.

“It is of great concern that the Department of Home Affairs visited Eastleigh in the week prior to the school sending its letter‚ and appears to have exerted pressure with regard to undocumented learners. It is simply not constitutionally permissible for the Department of Home Affairs to take this approach. While immigration control may be a legitimate government concern and function‚ it should never be addressed through the violation of children’s rights. No reason whatsoever‚ including irregular migration‚ can ever justify harming children through unlawful arrest or the denial of education.”

The lawyers requested the Department of Home Affairs to issue a directive to all schools clarifying the correct legal principles. “These include that refugee and asylum seeker children are entitled to be admitted to school even while awaiting documentation and do not need study permits to attend school; that school principals will not be arrested or fined for admitting undocumented children as is the rumour; and that undocumented children are allowed to attend school in South Africa.”

It also urged the home affairs department to amend laws to eliminate unconstitutional exclusions from birth registrations where children were born in South Africa or to South African parents and “to stop the discriminating practice of requiring expensive DNA tests for people faced with poverty before birth registration will take place”.

The Department of Social Development was also asked to intervene in cases where children are in need of care and protection and where parents are unresponsive in order to assist with the process of obtaining documentation for children.

As published by Times Live http://www.timeslive.co.za