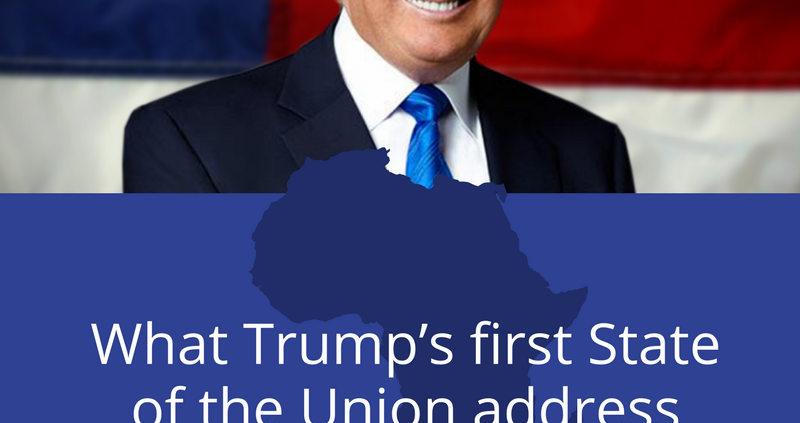 Donald Trump on Wednesday for the first time since his inauguration on January 20th addressed a joint session of the Congress on the state of the nation. The address which had on record more applauds than points was titled ‘Renewing the American Spirit’ even though it was basically a repetition of everything he has been saying since he made his intention to run for the presidency known in 2015.

Donald Trump took his time to roll out his achievements in the past 30 days, while also stating what he intends to do in the nearest future. In all of this, Africa and the black world appears to have a little bearing on the plans of Donald Trump. Everything, if any, he would be doing appears to be more orthodox. As he has been stating, Trump’s policies are almost entirely focused on America.

He restated his stance on immigration, howbeit in a subtle yet potent manner. He stressed yet again the need to “strengthen” the border to keep as many people out and as many American resources in. Donald Trump emphasised the enforcement of a renewed and reviewed immigration law, which will “keep Islamic radical terrorists out.” However, Trump mentioned the support of friends of America from the Muslim world in fighting radical Islamic terrorism, to show, more like feign, acceptance of his views by some powerful world countries. The strategy is simple: whatever means he takes, be it banning refugees from some countries or travellers from some other countries, it is all in a bid to defeat radical Islamic terrorism. “It is not to keep a people from a certain part of the world out, no, it is all just to preserve and protect our people from terrorists, foreign terrorists,” as though there are no home grown self-radicalised terrorist in America.

Though he never mentioned Africa expressly, he spent a lot of time on a topic peculiar to the black continent: immigration. While he did not explain it in the largely threatening and demeaning language he used during the campaign and inaugural speech, he reinforced the same doctrine that underlies his policy on immigration. By making reference to Canada which operates what Trump describes as “a marriage based” immigration system, Trump is announcing an end to the era of going to America to find a livelihood. To put it simply, you would not be going to America to “hustle”, you will be going to America to work, to study, or live with an outlined means of sustenance. This will definitely see a massive reduction in the number of immigrants from Africa.

In all this, one thing remains constant: Trump is putting America first. The greater part of the speech was dedicated to fronting his plan to make America and Americans better.

However, he expressed a certain interesting rejuvenated point: African Americans are as safe as white Americans in Trumpland. His plans to have an education bill which promotes school choice for every American child, including African Americans and Latinos—the two races that have suffered from Trump’s buccal swords—shows he will not be so hard on all immigrants. His problem remains illegal immigration.

Using a Black American as a face of his education policy might be seen an idea to bribe his way through the Democrats who have emphasised, deeply, on Trump’s perceived divisive policies. However, to the Black community, it shows they can feel American again. The message was quite clear: his would be an inclusive government (campaign is over).