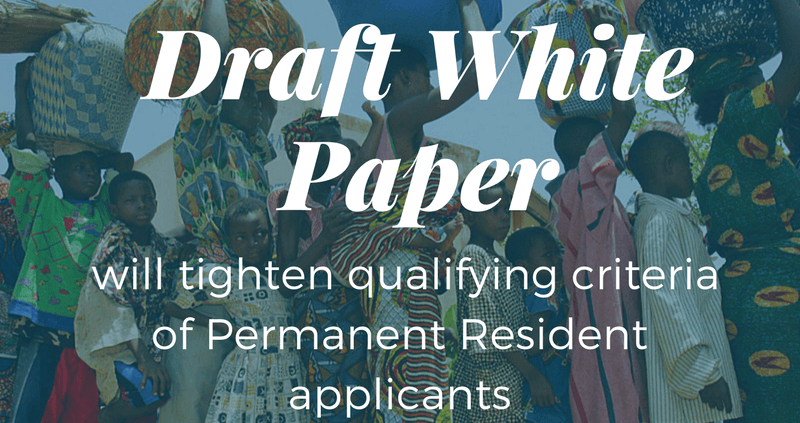 The Department of Home Affairs will push ahead with plans to establish border processing centres for refugees‚ as part of sweeping legislative changes to SA’s immigration regime that will also redefine processes leading to citizenship.

He was speaking at a conference on international migration‚ which including discussions on SA’s new White Paper on International Migration. The draft paper‚ expected to be given to Cabinet by the end of March‚ includes amendments to at least five Acts‚ including the Immigration Act and Marriage Act.

The department is also pushing to establish new structures‚ such as a Border Management Authority that could manage all aspects of cross border movement of people and goods.

The department sees the policy framework as a shift towards a more “Afro-centric” immigration regime‚ leveraging the development potential of migration‚ particularly at a regional level.

The draft White Paper seeks to increase “rules” on economic migrants‚ and the removal of an automatic progression from residency to citizenship.

These included “processing camps” that would house refugees pending adjudication of their cases. It would remove the automatic right to work or study pending the finalisation of an application that would take place in 120 days. This proposal remains‚ with a naturalisation strategy‚ to be developed.

It wants the introduction of a points-based system to determine eligibility criteria for long-term visas‚ which puts an end to a process of automatic citizenship for long-term residents.

This would be replaced by a proposed “Citizenship Advisory Panel” to consider applications.

Some 16 million foreigners enter and exit SA every year‚ with 1 082 669 asylum seekers being registered between 2006 and 2015. SA has also deported 369 000 people from 2012 to 2017‚ with Home Affairs estimating that 95% of asylum applications are from economic migrants as opposed to political refugees.

The department is expected to argue before Cabinet and Parliament that the cost of no investment in managing migration exceeds that of building capacity‚ but it has not quantified the cost to the fiscus of its various proposals.

“… It is not possible to prepare a complete fiscal and financial assessment of the White Paper’s implications which should be more properly assessed during the legislative process‚” an abridged version of the draft White Paper reads.