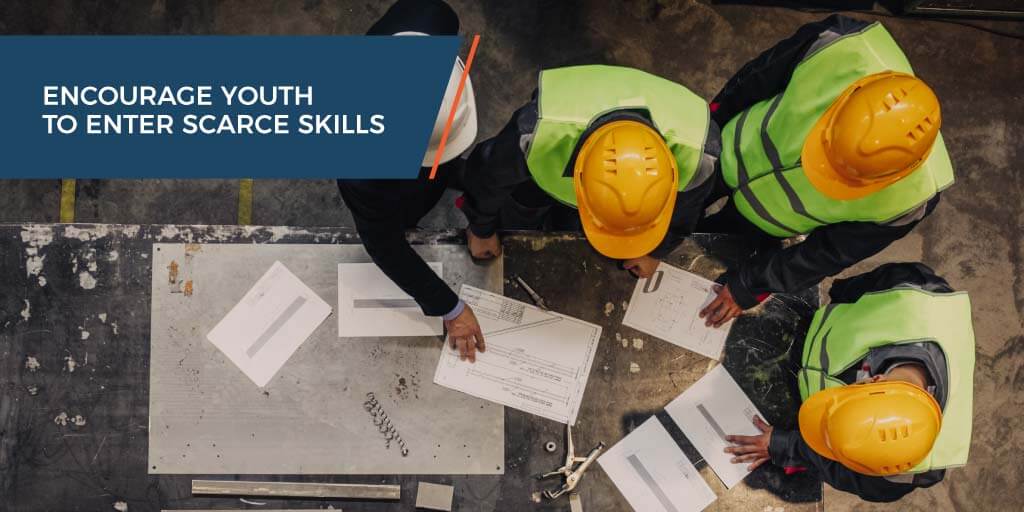 According to the Artisan Training Institute (ATI), the current industry shortage of skilled artisans in some trades, offers an alternative and often an even more secure choice as a career path, than securing a university degree. A number of trend reports, including the Department of Higher Education and Training’s National Scarce Skills List, supports this advice.

Trading Economics’s May 2018 statistics, pegs South Africa’s unemployment rate for this year’s first quarter at 26.7%, with the number of unemployed increasing by 100 000 to 5.98 million. These numbers are worrying, as this means that the country’s unemployment levels are at their highest in almost 15 years. Of the almost six million unemployed, the country’s youth are the most affected. With an increase of 1.6%, 58% of South Africa’s youth population is now unemployed, states IOL News.

Unfortunately, in these challenging economic conditions, a university degree is not a guarantee for securing employment after graduation. Statistic SA’s fourth-quarter labour survey for 2016 indicated that of the 58% unemployed youth, 7% are graduates.

In response to these statistics, the ANC stated that in order to eliminate poverty and reduce inequality by 2030, more than 30 000 to 40 000 qualified artisans should be produced annually to meet the industry’s labour demand. This mirrors the demand globally for a focus on promoting mid-level skills development to ease youth unemployment.

Artisan vocations are the answer

Another barrier South Africa’s unemployed face is international competition. Due to the local skills shortage, companies are turning towards the global landscape to fill vacant positions.

A 2017 critical skills survey by Xpatweb shows that 75% of South African companies actively seek international talent to fill positions, despite prohibitive visa processes. One of the critical occupations where companies struggle to find the necessary candidates locally, includes skilled artisans.

This shortage of skilled artisans poses an opportunity for youth to secure future employment. Instead of opting for expensive university and university of technology degrees or diplomas, which can result in thousands of rands of debt, vocational schools offer them a better chance at landing a job and building a successful career. The value of apprenticeship training is that learners gain valuable work experience while undergoing their training.

In an interview with RNEWS, Sean Jones, managing director of the Artisan Training Institute (ATI), states that many of the newly qualified artisans who complete their apprenticeships are almost immediately employed. ATI offers quality technical training in South Africa with this 35-year-old institute training around 1 200 to 1 400 learners a year.

“This is very much in line with a trend that we have noticed in industry; which is that quality artisanal qualifications provide fast access to the job market, better remuneration, and promising future career prospects.” He further states that the continued development of quality artisan qualifications can substantially alleviate the youth unemployment in South Africa.

For aspiring artisans, there is a useful resource available, published bi-annually by The Department of Higher Education and Training. The National Scarce Skills List is compiled using information from various governmental sources, such as the National Development Plan, the SETA’s Scarce Skills Lists, and the Industrial Policy Action Plan. This National Scarce Skills List provides the public with an overview of critical scarce skills by industry. In this context, a scarce skill is defined as the job type for which employers cannot find suitably qualified or experienced employees.

With the next National Scarce Skills due to be published soon, Jones is of the opinion that the findings will remain very similar, specifically based on industry demand. But he goes even further by providing more detailed insights about the rankings of these scarce skills. “According to ATI’s trend research, the three dominant trades have been motor diesel mechanics, electricians and fitting and turning. Regarding rankings, the motor diesel trade ranked first for five years up until 2015, after which the electrical trade took the first ranking from its second place (in the prior five years).”

In terms of motor diesel trade, the vocation regained the number one ranking in 2018, with electrical trade coming in at a close second, followed by fitting and turning in third place. Another positive development is that training in the millwright trade has steadily increased over the past eight years and similarly, the demand for the instrumentation trade (although there was a slight dip in 2018).

In essence, both these trend reports showcase that overall, skilled tradesmen are highly sought-after in South Africa. It is therefore imperative, to show young people that acquiring a trade is a viable option. StatisHVAtics increasingly prove that they are more often than not taken up into employment faster than university graduates with academic qualifications.

Creating widespread awareness of these opportunities and educating youth about these employment options is therefore, crucial – for the country’s citizens and the country. Jones concludes, “There are many top executives and entrepreneurs who started their careers ‘on the tools’. Working as an artisan can provide great career opportunities, plus skilled artisans are enjoying global mobility too.”