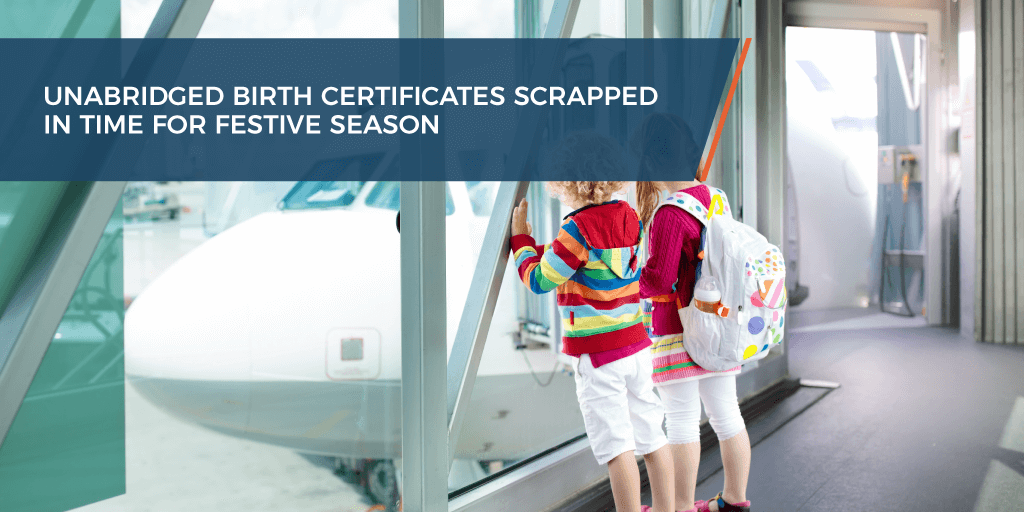 As the festive season approaches, the department of home affairs will scrap regulations requiring parents travelling with minors to present an unabridged birth certificate at ports of entry.

Speaking at a media briefing on Tuesday, Home Affairs Minister Malusi Gigaba said minors will still require the consent of both parents to leave the country. Children may travel however, with a birth certificate and a minor passport, which is in the process of being rolled out, and is in line with section 18 (3)(C) of the Children’s Act .

Rules from 2014 had stipulated that minors had to carry an unabridged birth certificate and have parental consent to travel.

In an interview with Radio 702 last week, David Frost, CEO of the Southern Africa Tourism Services Association said, “We know in the first year when the unabridged certificate requirement was being placed, 13 000 people were being turned away from points of embarkation but the real cost is people considering South Africa as a destination, coming across the requirements and then simply going to alternate destinations.”

These changes, Gigaba promised, will be implemented “in good time before the festive season”.

“The department of home affairs, is committed to managing immigration in a way that advances our national development, security and our international obligations,” Gigaba said.

“It is a challenge inherent in immigration management to protect, prevent and act against these risks,” Gigaba added.

In an effort to retain critical skills, the government will make it easier for international graduates to stay in South Africa.

However, the list of what constitutes being highly skilled has yet to be discussed or finalised.

The changes had been finalised during a September 19 Cabinet meeting. These include changes to regulations applying to foreign minors travelling to South Africa, visa waivers, and relaxation of visa requirements for certain countries namely Nigeria, China and India.

“We play a critical role in admitting over 10-million international visitors annually, which includes tourists, investors and neighbours,” said Gigaba. “Millions of jobs are sustained by the economic activity generated by these travellers.”

Gigaba said he wanted to make travel for visitors who support the growth of the economy as easy as possible, “while guarding against travellers who do not abide by our laws, those who overstay and persons associated with transnational threats such as organised crime, human trafficking, and terrorism.”

Other changes include an e-visa and e-gate. The latter will be piloted at Cape Town, King Shaka, and OR Tambo international airports to allow returning South African citizens, and trusted travellers — international travellers who visit South Africa frequently and do not have a criminal record — to use a self-service kiosk, lessening the number of people interacting with an immigration officer.

Gigaba said that South Africa was developing a biometric control movement in order to clear travellers quickly on arrival. The system has been piloted at Cape Town, Lanseria and OR Tambo and King Shaka airports. It has also been piloted at six of the country’s key land ports and processes are at an advanced stage to overhaul systems at land ports that have led to congestion.

“These measures have the potential to boost tourism and make business travel a lot more conducive. Tourism continues to be a great job creator and through these measures we are confident that many more tourists will visit South Africa,” President Cyril Ramaphosa said on Friday.

For advice or assistance with a visa application, please contact us on:

011 467 0810
or Send a Mail
#VisaAmendments : Highlights from Department of Home Affairs Address