Mauritius has been a popular holiday destination for South Africans for many years, but the government’s recent concessions have made it more accessible and affordable for South Africans to retire, live and work than ever before. In June 2020, the Mauritian government’s changes to investment thresholds, the extension of work, residence, retirement permits, and attractive property acquisition options, led to renewed interest from South Africans, says Marisa Jacobs, Director at Xpatweb.

“Skilled professionals and business owners with families in South Africa are taking note of Finance Minister Renganaden Padayachy’s changes and adjustments for foreigners. It is now easier to buy property, work, as well as retire on the island, which is appealing for many, including business owners, corporates  and families in South Africa who are looking for a new place to call home,” says Jacobs.

In the past, South African retirees were only able to obtain a three-year permit for Mauritius. This has been extended to ten years, with the requirement that the individual earns a recurring income of $1,500 per month. The amount can be paid annually, quarterly, or monthly, as long as it works out to $1,500 per month.

“The extension from three to ten years gives retirees more certainty about their future in the country. Mauritius’ Permanent Residence and Work Permits have been combined into a single permit and extended from ten to twenty years,” says Jacobs.

The minimum investment to obtain an Occupational Permit (OP) has also been halved from $100,000 to $50,000. The parents of an OP holder may now obtain a dependent permit to live in Mauritius. Professionals who are working as independent contractors can qualify for the self-employment permit. The requirement for this permit is a deposit of $35,000 into their Mauritian bank account, and this permit is also valid for ten years.

“Working professionals and self-employed individuals who want to move their spouse and aging parents find these concessions favourable, especially if their dependents are no longer working,” says Jacobs.

Buying property is still a popular route of entry for those looking to move to Mauritius. In the past, foreign nationals were required to invest $500,000 in the property. This number has now been reduced to $375,000.

“The dispensation for owning property in Mauritius is far more flexible than in most other African countries. In Mauritius, a South African is allowed to purchase a property as a freehold, or through a 99-year lease agreement with the option of renewal,” says Jacobs.

“The effective tax rate of 15% for individuals are well below those applicable to South Africa and other countries. A significant difference is that Mauritian residents are only taxed to the extent of the money that they bring into the country. These financial incentives, combined with the close proximity to South Africa, will likely see more people moving to Mauritius in the future. 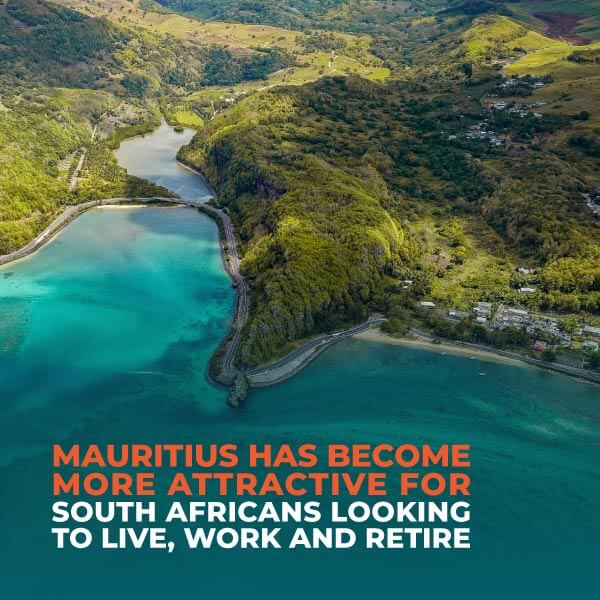