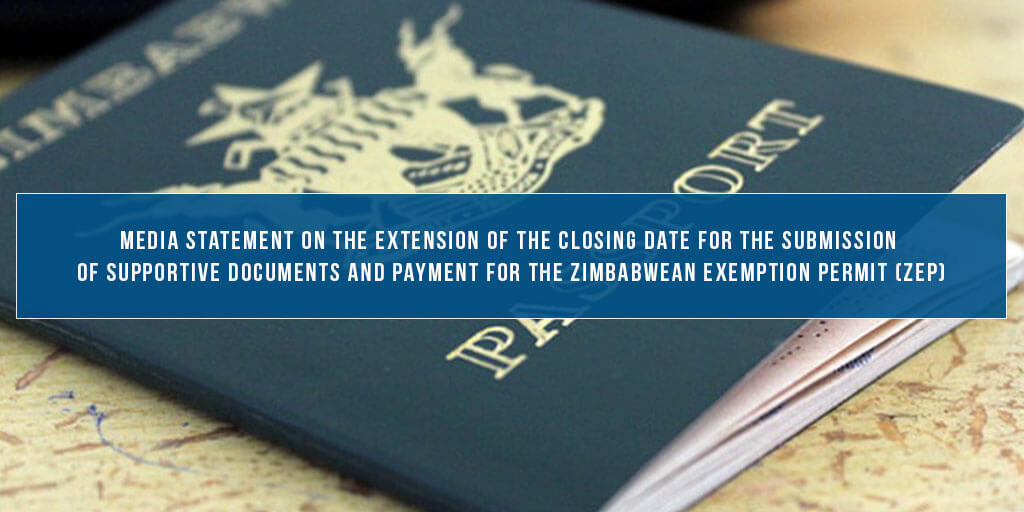 The Department of Home Affairs has extended the closing date for payments and submission of supporting documents and biometrics for the new Zimbabwean Exemption Permit (ZEP), until 15 February 2018. The cut-off date was initially 30 November 2017 and was extended to 31 January 2018 in the hope that all those who had applied online would have made the necessary payment and provided the required supporting documents and biometrics.

By 29 January 2018, a total of 176 605 applicants had completed the entire process, which includes honouring their appointments with VFS and submitting supporting documents and biometrics.

The extension, to 15 February 2018, is only for submitting biometrics (fingerprints) and supporting documents at the 10 VFS offices listed below as well as for those who have submitted online applications by 30 November 2017 but did not pay the prescribed fee. New applications will not be accepted. By the end of September 2018, the Department plans to have completed the whole project, including finalising adjudications and issuing out of all new permits.

The ZSP which started in 2014 with 197 951 permits issued expired on the 31st of December 2017. ZEP permit holders will be allowed to work, study or conduct business in South Africa. The ZEP permits are valid for a maximum period of four (4) years, effective from 01 January 2018 and expiring on 31 December 2021, notwithstanding the date of issue. Exemption permits like the ZEP permits are not permanent or long-term. They only serve a specific purpose with a view ultimately to have people returning to their countries of origin, to build their lives anew.