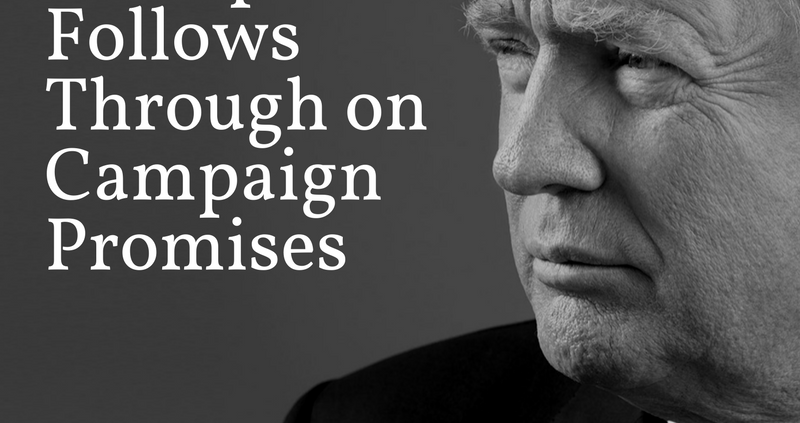 TRUMP FOLLOWS THROUGH ON CAMPAIGN PLEDGES

On Wednesday, 25 January 2017, The US President, Donald Trump took his first step to enact his pledge(s) by signing the executive orders to ‘Build a Wall’ on the Mexican border and to prevent sanctuary cities from offering protection to undocumented immigrants.

This wall will be built on the border between the United States and Mexico – the border is stretched by 2 000 miles (3 200 kilometres).

President Trump claims: “a nation without borders is not a nation”, by signing this order, he believes that the United States of America gets back their borders.

By building this wall, it could possibly lead to a decrease in unemployment as Trump has given the Department of Homeland Security (DHS) authority to employ another 5 000 border patrol officers and triple the roster of immigration enforcement agents.

“Mexico does not believe in walls” – Enrique Pena Nieto, President of Mexico stated.

President Enrique Pena Nieto is said to make a visit in Washington on 31 January 2017.

President Trump signed an additional executive order which aims to prevent sanctuary cities across the country from offering protection to illegal immigrants. The order reads as follows:

“The Attorney General and the Secretary, in their discretion and to the extent consistent with law, shall ensure that jurisdictions that wilfully refuse to comply with 8 U.S.C. 1373 (sanctuary jurisdictions) are not eligible to receive Federal grants, except as deemed necessary for law enforcement purposes by the Attorney General or the Secretary.”

Trump added that strong immigration laws will be enforced, by such means that he has given authority for another additional 10 000 immigration officers to be hired in order for the job to be done properly.

Trump expects the relationship between the United States and Mexico to improve as the illegal immigrants are bad- and his actions should benefit both parties.

In addition to the above pledges, the idea of banning Muslims to come to the United States has been mentioned by Trump.

The following countries will be restricted for refugees and visa holders to enter the United States as they are already facing issues in trying to obtain a US visa:

Syria for instance, have already an estimated 18 000 citizens who have fled to the United States, whereby Trump wishes to decrease these numbers enormously.

Trump is not wasting any time by following through on his promises he had made during his campaign.