The Department of Home Affairs has made some concessions to foreign nationals in South Africa whose visas are about to expire and where travelling to their home countries is not an option.

The department issued a directive that allows for the extension of all Chinese nationals in SA whose visas are about to expire to remain in the country until 31 July.

Marisa Jacobs, director at Xpatweb and head of immigration and mobility, encourages foreign nationals to apply for the extension or renewal of their visas to remain compliant. “Do not use the coronavirus as an excuse not to take the necessary measures to remain compliant. There are concessions – make use of them.”

She says their client base is largely multinational companies with foreigners working in SA. This include critically skilled or executive level individuals as well as technical project-related foreign nationals. They have been concerned about their position should their visas expire. “They would normally have travelled back to their home countries, but with the ever-increasing travel bans this is not an option at this stage.”

Jacobs says there are also several instances where companies have resources that are due to enter SA to start on projects or assignments. “Many are not able to enter the country anymore due to the travel bans, or they are no longer able to obtain a visa.”

Several embassies where visa applications for entry into SA have been pending, have in recent days sent out notices that they will be closing their offices and they will no longer process applications. People have been asked to collect their passports. The situation is completely fluid at the moment. An embassy that is open today, can be closed tomorrow, she says.

Xpatweb has received notices from embassies in the UK, Canada, Qatar and Sweden indicating that they will no longer process visa applications. However, the embassy in China has remained open.

“We are advising people who are due to travel to SA to submit their applications as soon as possible if their embassies remain open and they are processing applications,” says Jacobs.

In practice not all travel can be avoided. Jacobs says they have found the Department of Home Affairs to be quite sympathetic and has been willing to make exceptions when it is critical for people to travel to SA. Jacobs advises people who have to travel urgently to ensure their flight bookings and accommodation are open-ended or changeable.

“We foresee more restrictions in the coming weeks from everywhere. People need to be pro-active, and although most people will restrict their travel as far as possible there will be instances where travelling cannot be avoided.” People who have travelled and are stuck because of travel restrictions should contact their embassies.

The department of home affairs has been extremely helpful with information and their efforts to accommodate people, says Jacobs. 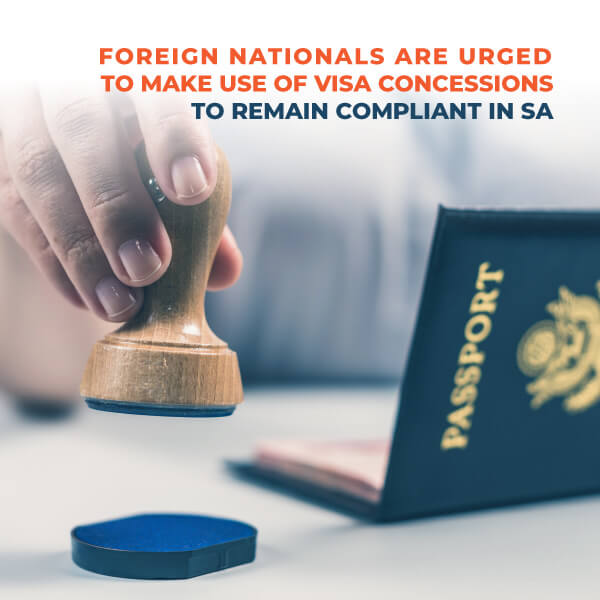