President Nyusi has just addressed the nation, announcing new coronavirus prevention measures due to take effect as from Monday, March 23,  for the next 30 days. Mozambique will subject all travellers , Mozambicans or foreigners, entering the country to a mandatory 14-day home quarantine.

The President also announced that the country will close all private and public schools, suspend visa issuance and revoke previously granted visas and ban public or private gatherings of more than 50 people except those of national interest, such as parliament sessions.

The mandatory home quarantine was previously applied only for citizens, Mozambicans or foreigners,  arriving  from designated countries but it  now applies to any traveller entering the country.

Meanwhile, a technical-scientific commission to advise the Government in making decisions about the pandemic, will be created.

The government will also strengthen  monitoring.

The closure of schools cover all educational establishments in the country, from kindergarten to University.

The President further  informed that no confirmed cases have been recorded so far in Mozambique, adding that there is no record of confirmed cases among Mozambicans in the diaspora either.

President Nyusi underlined that prevention is key in a country with our characteristics, calling on all, namely the Press, to support and convey these measures and other related information supplied by the health authorities.

Although no cases of the respiratory disease Covid-19 have yet been detected in Mozambique, the government has decided to step its preventive measures, notably by shutting down all the country’s schools.

Addressing the nation on television and radio on Friday afternoon, President Filipe Nyusi said all schools, whether publicly or privately owned, and teaching all levels of education, from pre-school up to university, must close for 30 days as from next Monday.

The restriction on meetings has been tightened, on Saturday the government announced a ban on all gatherings of more than 300 people. Nyusi’s Friday announcement brought this limit down to 50.

He made it clear that this restriction applies to all meetings, including religious services. AIM is aware of some churches in Maputo which disregarded the earlier ban.

There will be exceptions from the ban for state events, such as the forthcoming sitting of the Mozambican parliament, the Assembly of the Republic, which is due to begin on 25 March.

Nyusi said the government will ban the issuing of entry visas, and cancel visas that have already been issued. He said nothing about citizens of countries who do not need entry visas (mostly other members of the Southern African Development Community, SADC).

The Health Ministry had promised to update this list every day, but that will hardly be necessary, if everybody arriving in the country is to be quarantined.

Nyusi said that preventive measures must be taken in all public and private institutions. Many institutions are already obliging their employees and workers to wash their hands, and are regularly disinfecting surfaces.

The President also announced the creation of a technical and scientific committee, headed by Health Minister Armindo Tiago, which will accompany the development of the pandemic and advise the government. The commission will include not only health experts, but other scientists, and media professionals.

Nyusi announced that 35 suspect cases had been tested for the coronavirus and all proved negative. Similar there have been no reports of any Mozambicans living in the diaspora becoming infected. 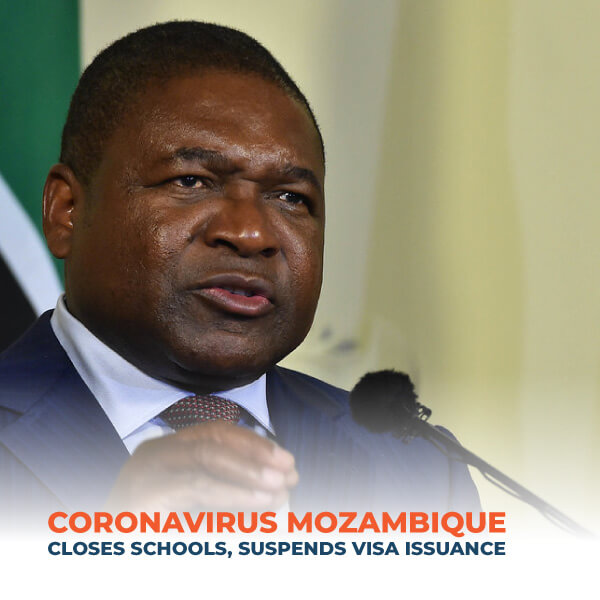 More News
NEWS | FOREIGN NATIONALS ARE URGED TO MAKE USE OF VISA CONCESSIONS TO REMAIN...