WHAT TO DO AFTER YOUR EMPLOYEE HAS LEFT MOZAMBIQUE

Oftentimes, HR and operations departments place a greater emphasis on an expatriate’s immigration requirements when initially entering a given jurisdiction that is required to kickstart a project or deliver to a client locally.

After an expat has completed his assignment or has unexpectedly resigned, certain exit formalities must take place to remove all immigration and tax responsibility for an expatriate which are requirements that form part of immigration compliance and more commonly are overlooked as part of the immigration process as a whole.

Mozambican employers are required to update their annual list of employees on a yearly basis by the end of April also known as the “Relação Nominal” to the Ministry of Labour. This annual list of employees includes both the national and foreign nationals employed by the Mozambican employer and is used to determine the number of quota applications that a Mozambican employer can use for any foreign nationals in the oil and gas sector and other sectors. Applications within quota are processed in a quicker timeframe generally within 4-6 weeks depending on the backlog of applications with the Directorate of Labour. As such, it is to the benefit of the company to ensure this list is updated regularly or at least yearly.

However, in addition to this, it is the employer’s obligation to cancel their expat’s work permits, whether within quota or outside the quota, with the Directorate of Labour. Without undergoing the cancellation process, the expat will still reflect on Labour’s system impacting the ability to apply for new quota applications as these appear as filled on the system. In order to benefit from the quicker processing times of in quota applications, employers must ensure they cancel work permits immediately after an expatriate has exited Mozambique. Although there is a greater emphasis on cancelling work permits within quota, it is still required to cancel work permits outside the quota. Employers must ensure they complete the cancellation process so as to remove any immigration responsibility for an expatriate in Mozambique once they have concluded their assignment with their local entity.

Cancellation of Visas and Residence Permits

What Are The Main Implications for Failure to Cancel Permits?

Primarily, cancellation of residence and work permits removes an employer’s immigration responsibility of an expatriate employee in Mozambique as their immigration status shall remain tied to their employer until labour and immigration departments are notified otherwise. Furthermore, an employer will continue to have social security and tax implications over their expats should they not be appropriately removed from their records. Should a company have outstanding tax and social security payments relating to any foreign nationals on their employee records, it will definitely cause delays in future applications as the Directorate of Labour’s system cannot process applications with outstanding tax and social security contributions. As such, Mozambican employers must ensure due diligence in completing exit formalities for all foreign nationals who complete an assignment in Mozambique. 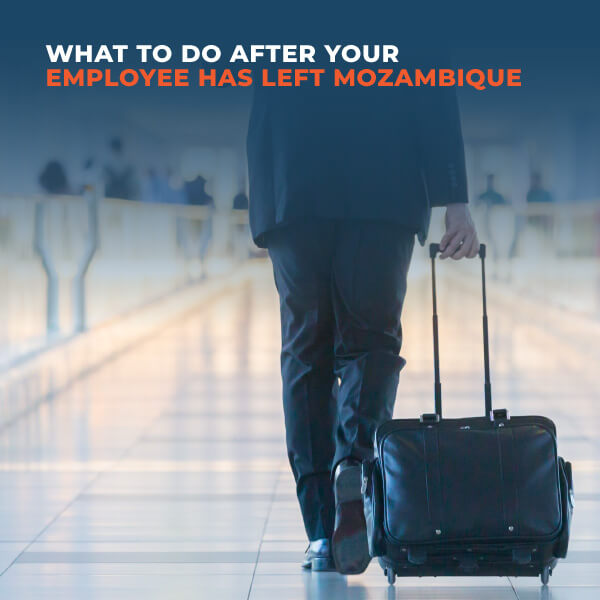 NEWS | FOREIGN NATIONALS STRANDED IN SOUTH AFRICA: HERE’S WHAT YOU NEED TO...