The Department of Home Affairs is currently calling for public comment on the draft of a new Critical Skills List. However, Foreign Language Speakers, a role that featured in the previous List, has been omitted from the draft List.

“Foreign language employees are more valuable than the language they speak and are critical to job creation inside South Africa’s borders,” says Marisa Jacobs, Managing Director at Xpatweb.

This skill appears high on the company’s Critical Skills Survey results, which were used as input for the draft List.

The company’s business development managers and export coordinators must be fluent in the language to a degree not found in South Africa. “If we are able to source them, they usually don’t have the skillset or experience we demand for the quality of service we must deliver,” she says.

Foreign language workers not only communicate complex information fluently but bring with them international experience and an understanding of the unique traits and expectations of IOEC’s target market.

McCormick reports that the company previously tried outsourcing these functions to agents in the destination regions but assuring service quality from a distance proved impossible. “For our model to work, our business development managers and export coordinators must be located in-house,” she says.

“These activities require in-depth knowledge of the specific country, its customs, traditions, preferences, nuances and more,” says Sharon Haigh, CEO of Contact Centre Management Group (CCMG), a professional body representing over 2,000 South African contact centres. “Merely being able to speak the language without this knowledge has proven insufficient for our members’ needs,” she says.

According to Haigh, the 10 to 15 percent of foreign speakers typically employed at local contact centres ensures those companies can provide jobs to the 85 percent of local workers who support them. In addition, South Africa has been voted the world’s second most attractive BPO destination for three years running. It can improve this standing by focusing on authentic foreign language support.

However, leaders in the tourism field have long complained that a lack of competent foreign language speakers is hurting the industry, especially during peak season. Travellers with money to spend would rather frequent regions where their native tongue is represented.

The Department of Tourism has acknowledged this need by offering a two-month course in Mandarin to local tour guides. However, one cannot learn a language effectively in two months and guides make up a small part of the overall business and marketing drive to attract tourists in the first place.

Jacobs agrees: “Tourism is a major contributor to the South African economy and native foreign language speakers are strongly linked to growth in that sector.” She adds that preliminary results from Xpatweb’s 2020/21 Critical Skills Survey reveal a significant increase in demand for this role among participants, jumping from 6 percent last year to 16 percent in 2021.

Xpatweb has carried out its Critical Skills Survey for the past 5 years, providing reliable data on the needs of South African businesses. As a result, it was the only private sector organisation invited to present its findings before the Departments involved in compiling the draft List. This demonstrates the quality of its data and research methodology.

Jacobs encourages organisations who rely on foreign language speakers for the sustainability and growth of their business to comment on the draft List before 16h00 on 31 March 2021.

“If they don’t, they will have to wait several months longer before an employee critical to their operations can be onboarded due to visa application restrictions,” she warns.

Jacobs also invites these employers to complete the current Critical Skills Survey, which is more in-depth than previously. Doing so will ensure their needs are presented to regulators long before the next public comment process is announced. 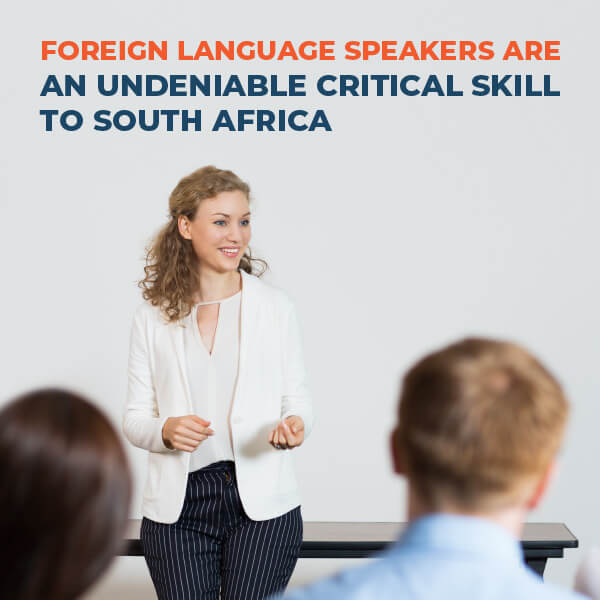 BUSINESSES CAN GET URGENT APPROVAL FOR PROFESSIONALS TO WORK IN SOUTH AFRICA...