The Department of Higher Education and Training released the draft list of Occupations in High Demand on 17 August 2020. The list is currently open for public comment until 7 September 2020. The list will serve as the basis for the Department of Home Affairs’ (DHA) updated Critical Skills list, which was originally expected earlier this year.

“The new Critical Skills list was expected to be released in April 2020, but the COVID-19 pandemic delayed this process,” says Xpatweb’s Marisa Jacobs. “The Occupations in High Demand list is now available for public commentary, submissions must be made by Monday, 7 September. The signiﬁcance of the list is that it will form the basis for the updated Critical Skills list by the DHA which contains all the skills deemed in short supply in South Africa. Thus, any person who ﬁts the criteria contained therein may qualify for a Work Visa, under the Critical Skills Visa category, as per the Immigration Act.”

Xpatweb is running its fourth annual critical skills survey among local businesses, including JSE-listed companies and large multinational groups. Companies are encouraged to submit their inputs before 4 September on the skills they struggle to recruit locally.

“It is important that employers are represented with a submission and inputs on any occupations not included on the list and the survey results will form the basis of this submission. It’s a tight deadline, but the response has been very positive. Survey respondents grew by 30% last year and we’re expecting an even greater spike this year as the local business community – across all sectors – are eager to give input on the government gazette that will determine which foreign skills local businesses can employ under the Critical Skills visa category,” says Jacobs.

There is a growing concern among many South Africans that skilled people are leaving the country in droves, choosing to relocate to New Zealand, Canada, the UK, Australia and Mauritius to name a few. Any discussion about emigration numbers is complicated by the fact that there is no official bureau in South Africa that collects emigration data. Resources from Stats SA, the United Nations International Migrant Stock database, and National statistics offices (NSOs) of foreign nations, however, suggest that upwards of 23,000 people per year are emigrating from South Africa.

“People who are emigrating are often skilled and experienced, which is why they can find work abroad. Therefore, it is important to be reminded that skills are globally sourced for the economic beneﬁt of those countries and South Africa has to compete for scarce skills,” says Jacobs.

The latest Critical Skills List by the Department of Home Affairs was published in 2014. According to Xpatweb’s annual survey, several occupations that corporate South Africa needs are not on the latest DHET Occupations in High Demand list, including several categories of ICT specialists and engineers, and foreign language speakers. Occupations included range from chef, wine maker, tobacco grader and tour guide to nurse, rigger, actuary and software engineer

“There is a continued lack of critically skilled individuals available in South Africa and thanks to survey participants, we are able to guide the government’s critical skills list and help shape the decisions that will help local businesses reinvigorate the economy,” concludes Jacobs. 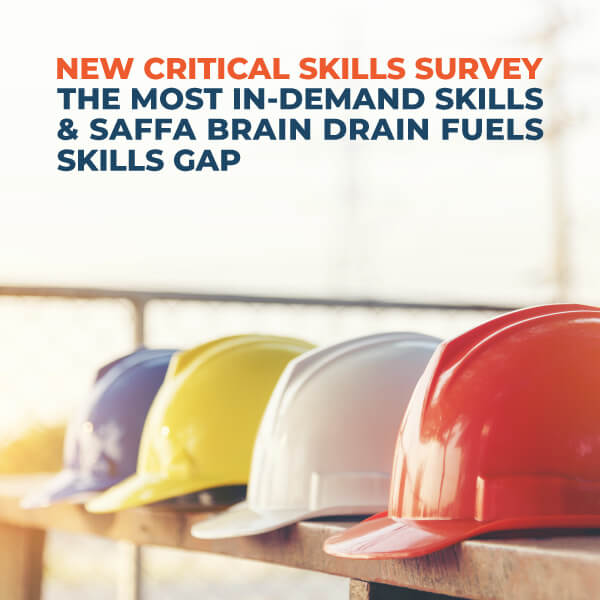 NEWS | EXPECT A BACKLOG IN WORK VISA APPLICATION PROCESSING FOR FOREIGNERS IN...